The Best Cooking Oil To Use

There really isn't one best fat or cooking oil to use. Different fats do different jobs and the problem with a question like that is, the answer depends entirely on what you are talking about.

For example, if you are making a pie crust, and your goal is to have the flakiest crust possible, then the hands down best cooking oil or fat to use is hydrogenated shortening. With the same goal in mind, the flakiest pie crust, but with the added criteria of flavor or taste and lower triglycerides, then the best cooking oil or fat becomes a blend of butter and lard or tallow.

In order from left to right: peanut oil, grape seed oil, and extra virgin olive oil. They are all the best cooking oil for a particular job.

The temperature at which a given oil will start to smoke and break down is called its smoke point. Unsaturated oil, including olive oil, will break down and develop carcinogens when heating it too high or heating it repeatedly. So, using these oils more than once, or heating them to the point where they start to smoke is a bad idea.

Rendered animal fats, particularly beef tallow, is one of the best tasting oils to use and the best oil based on performance, but because of the public perception that these fats are harmful to health, it's difficult to find them anymore. This is the reason I make all my own rendered animal fats.

The proper method for adding oil to a pan is to put the pan on the burner and bring it up to cooking temperature. Then add your oil. The oil will heat almost instantly and you can add your food.

If your oil reaches the smoke point before you've started cooking, it means the oil is chemically breaking down.  For us cooks, that nasty smell imparts off flavors in our food, as well as carcinogens.  If you're oil reaches its smoke point get rid of that oil and start again.

The list below, while by no means comprehensive, represents those oils most commonly found on supermarket shelves, as well as a few animal fats that are more difficult to find.

The temperatures are not absolute, but approximations that vary depending on various aspects of the oil; it depends to a large extent on its purity and age at the time of use. The same oil will deteriorate with time so the smoke point of any given oil will change slightly over time.

Some of the best cooking oils for high heat cooking like deep frying and shallow frying are peanut oil, lard, tallow, and duck fat.

Vegetable Oil is a catch-all term that describes any oil produced from a vegetable. This allows manufacturers to produce the oil from the most economically favorable source at any given time. However, since it is marketed as vegetable oil for cooking there needs to be some continuity in the performance, or smoke point, of the oil. Thus, it is typically produced from soybeans.

There is a somewhat widespread practice of mixing oils for cooking. The belief being that mixing a lower smoke point oil with a higher one will raise the overall smoke point, it doesn't. For example, mixing butter with refined safflower oil does not result in a blend with a smoke point of 405 degrees. What happens is the butter burns at 300 degrees and the oil is subsequently ruined. However, mixing two or more oils with the same smoke point will work just fine.

While you now know what the smoke point of an oil is, it's flash point is very different. The flash point is the temperature at which a substance will spontaneously combust. With cooking oils that temperature is around 700 degrees. At this temperature flames will begin popping up on the surface of the oil. At about 800 degrees the oil will burst into flames. The best thing to do is turn off the burner, put a heavy lid on the pan, and remove it from the burner, in that order.

These are compelling reasons not to leave the stove when your heating oil, or for that matter cooking in general.

How To Clarify Butter

One of the easiest ways to clarify butter is to put your butter in a saucepan and melt it just until the emulsion breaks and it begins to foam a little. Immediately transfer the butter to another saucepan and allow it to cool. Once you can comfortably dip your finger in without burning, it will be cool enough to transfer to a plastic quart container.

The Best Cooking Oil For Everyday Use 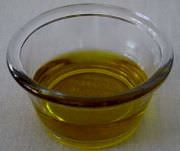 New diet fads and healthy eating trends pop up faster than you can say "diet". That really doesn't come as a surprise when you consider that the weight-loss industry is a 40-billion a year industry, and it's climbing.

In response to the never ending fad-diet-popup, every few years or so university researchers do an analysis of the best diet. Invariably, they always find the same conclusion, the Mediterranean diet is the healthiest diet there is. At the core of Mediterranean cuisine is extra virgin olive oil.

In Italy, I worked in two restaurants, and I went to culinary school over there. The only oils or fats that were ever used was peanut oil for deep-frying and extra virgin olive oil.

How To Remove Oil Stains

Typically I keep a couple of old t-shirts around and use them for cooking. But, once in a while I get involved in a cooking project and I am wearing a nice shirt or slacks. Next thing you know something pops in the pan and I have grease splatter all over my clothes. Ever wondered how to remove grease and oil stains in clothing? Dawn dish-washing detergent, that's it. Nothing cuts through grease to removes stains better than Dawn. In my professional kitchens I never bought industrial degreasers. We just mixed up a little dawn and hot water and away went the grease.

The next best product I've ever seen for cutting through grease is Palmolive dish-washing detergent, it works but it doesn't seem to work quite as well as Dawn, so it's always my second choice.

The caveat, this only works to remove oil stains from your clothes if you rub dawn into the stain before it goes through the washer and dryer. Once clothes have gone through a wash and dry cycle, nothing is going to get that stain out.