You are here: Home > kitchen Information > Cooking Definitions And Terms 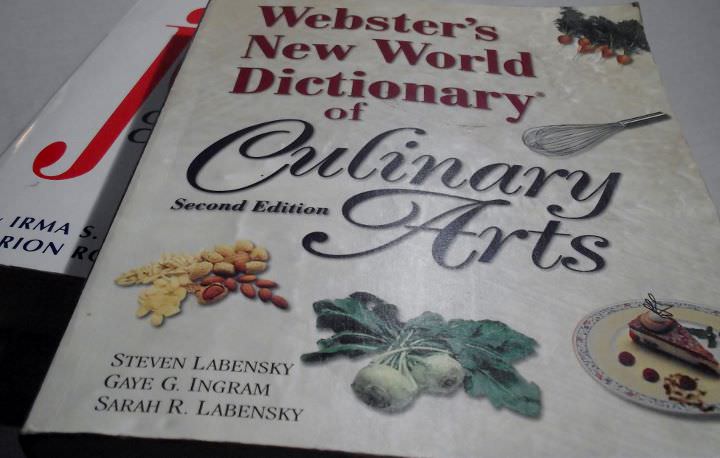 Cooking definitions and terms because no one ever gets tired of vocabulary and grammar.

Cooking terms is one of the necessary evils that goes along with cooking.

It has always seemed to me that one of the hurdles with learning anything new is learning the vocabulary that goes along with that something new. Cooking is no different. Having a good cooking vocabulary will help you when you're reading recipes.

An Italian phrase meaning "to the tooth," used to describe pasta or other food that is cooked only until it offers a slight resistance when bitten into, but which is not soft or overdone.

To cook food in an oven, dry heat cooking method.

A method of cooking by which meat, poultry or fish (either whole or in pieces) or other food is covered and slowly cooked in a pit or on a spit, using hot coals or hardwood as a heat source. The food is basted, usually with a highly seasoned sauce, to keep it moist.

To spoon or brush food as it cooks with melted butter or other fat, meat drippings or liquid such as stock. In addition to adding flavor and color, basting helps keep meats and other foods from drying out. Fatty roasts, when cooked fat side up, do not need basting.

To plunge food (usually vegetables and fruits) into boiling water briefly, then into cold water to stop the cooking process.

A horticultural technique whereby the leaves of plants are whitened or prevented from becoming green by growing them in complete darkness. It's this labor-intensive process that makes Belgian endive so expensive.

"Bring to a boil" refers to heating a liquid until bubbles break the surface (212°F for water at sea level). The term also means to cook food in a boiling liquid. A "full rolling boil" is one that cannot be dissipated by stirring.

A cooking method by which food (usually meat or vegetables) is first browned in fat, then cooked, tightly covered, in a small amount of liquid at low heat for a lengthy period of time. The long, slow cooking develops flavor and tenderizes foods by gently breaking down their fibers. Braising can be done on top of the range or in the oven. A tight-fitting lid is very important to prevent the liquid from evaporating.

To cook directly under a heat source.

To heat sugar between 320 and 350 degrees. Caramelization is the browning of sugar, a process used extensively in cooking for the resulting nutty flavor and brown color. As the process occurs, volatile chemicals are released, producing the characteristic caramel flavor. Note that the preparation of many "caramelized" foods also involves the Maillard reaction; particularly recipes involving protein and/or amino acid -rich ingredients. See Maillard reaction.

To cover food with an outer coating before cooking, typically food is coated in flour, then dipped in egg, and finally rolled in breadcrumbs. Also referred to as breading.

To remove the core from vegetables or fruit.

To cook until food is done but still retains some crispness.

To add a drop or two of liquid or a pinch of spice.

After food (usually meat) has been sauteed and the food and excess fat removed from the pan, deglazing is done by heating a small amount of liquid in the pan and stirring to loosen browned bits of food on the bottom. The liquid used is most often wine or stock. The resultant mixture often becomes a base for a sauce to accompany the food cooked in the pan.

To separate food with a fork, usually fish or braised meat.

A decorative edible accompaniment to a finished plate.

French for "gastric," referring culinarily to a syrupy reduction of caramelized sugar and an acid, like vinegar or citrus juice, sometimes with the addition of wine.

To apply a thin layer of fat to a baking pan.

To apply a thin layer of fat to a baking pan and coat it with flour, typically for cakes.

To prepare food on a grill over hot coals or other heat source. The term barbecue is often used as a synonym for grill. See also Hand Test for Grilling Temperatures.

To remove the outer covering or the leafy portion at the top, in the case of strawberries.

To remove the outer covering, as with corn.

A technique used to mix and work a dough in order to form it into a cohesive, pliable mass. During kneading, the network of gluten strands stretches and expands, thereby enabling a dough to hold in the gas bubbles formed by a leavener which allows it to rise.

The Maillard reaction is a chemical reaction between amino acids and reducing sugars that gives browned foods their desirable flavor.

To soak a food (usually fruit) in a liquid in order to infuse it with the liquid's flavor.

To soak a food such as meat, fish or vegetables in a seasoned liquid mixture called a marinade.

To prepare, to have everything ready before you begin cooking.

To cook food gently in liquid just below the boiling point when the liquid's surface is beginning to show some quivering movement.

To grind or mash food until it's completely smooth. This can be accomplished by one of several methods including using a food processor or blender or by forcing the food through a strainer or food mill.

Culinarily, to boil a liquid (usually stock, wine or a sauce mixture) rapidly until the volume is reduced by evaporation, thereby thickening the consistency and intensifying the flavor. Such a mixture is sometimes referred to as a reduction.

To oven-cook food (from meats to vegetables) in a shallow uncovered pan.

To cook food quickly in a small amount of oil or other fat in a skillet or saute pan over direct heat.

A cooking technique—often used to retard the souring of milk—whereby a liquid is heated to just below the boiling point.

To make shallow cuts (usually in a diamond pattern) in the surface of certain foods, such as meat or fish.

To brown proteins quickly by subjecting it to very high heat in a skillet.

To flavor foods in order to improve their taste, principally using salt.

To cook food gently in liquid at a temperature (about 185°F) low enough that tiny bubbles just begin to break the surface.

To remove the top layer from a liquid, such as cream from milk or foam and fat from stock, soups, sauces, etc.

To whip egg whites until the whites form a point that rolls over when you remove the beater.

Cooking method whereby food is placed on a rack or in a special steamer basket over boiling or simmering water in a covered pan.

A method of cooking by which food is barely covered with liquid and simmered slowly for a long period of time.

To whip egg whites until the whites form a point that stays firm when you remove the beater.

To quickly fry small pieces of food in a large pan over very high heat while constantly and briskly stirring the food.

To beat ingredients, such as egg whites, cream, etc., thereby incorporating air into them and increasing their volume until they are light and fluffy.

The perfumy outermost skin layer of citrus fruit (usually oranges or lemons), which is removed with the aid of a citrus zester, paring knife or vegetable peeler. Only the colored portion of the skin (and not the white pith) is considered the zest.