Learn to bake bread like a professional baker. Always calculate your desired dough temperature. It doesn't matter what kind of flour you are using, bread flour, whole grain wheat, or all-purpose your results will be consistent and you will have more control over the dough. 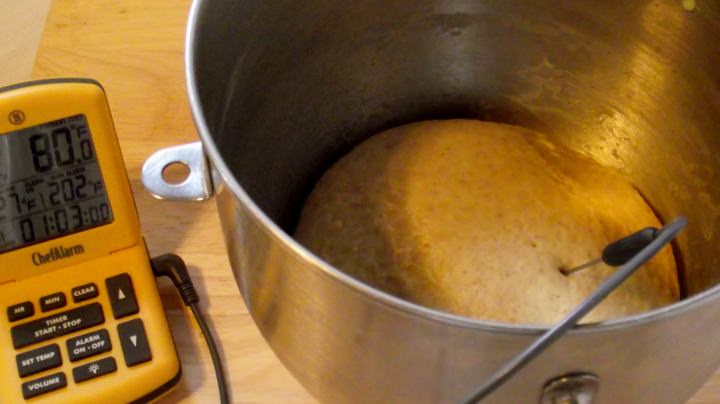 Bakers have found that dough develops best around 75° F. Bakers have, also, found that the only really effective control they have over temperature is through water.

To calculate the temperature increase from kneading, take the temperature of your dough when it just comes together, and then again when you are done kneading it. The difference is how much the dough heated up.

Note that for room temperature and flour temperature, I did a straight conversion from Fahrenheit to Celsius. Mixer friction, however, is a temperature difference, thus conversion to the equivalent amount in Celsius is not the same.

To convert from F to C you subtract 32 and multiply by 5, then divide by 9. For a temperature difference conversion, you leave out the subtraction of 32. Thus a mixer friction factor of 8° F is equivalent to 4.4° C, not to -13° C.