You are here: Home > Kitchen Ingredients > Facts About Eggs 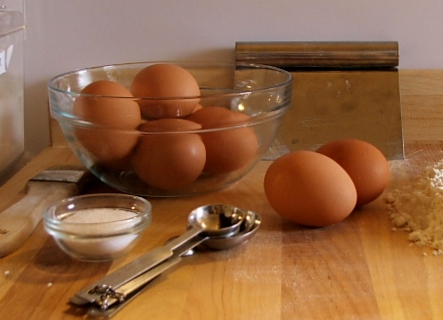 Eggs: a single cell. Who would have thought that a single cell would give us so much. "The incredible, edible egg." There's a reason the American Egg Board uses that slogan. They are one of the most versatile and amazing ingredients in a kitchen. From providing a simple meal in and of itself to transforming ingredients into custards, sauces, souffles, meringues, desserts, stuffing, and everything in between, they truly are one of nature's miracles and a kitchen's treasure. As a matter of fact, a chef's hat is said to have a pleat for each of the many ways you can cook an egg.

The Importance Of An Egg And Discipline In A Professional Kitchen

Let me just say this, when your chef says something to you there is only one answer: "Yes Chef!" That's it.

Years ago at a Michelin starred restaurant in California there was a line cook. He was working the egg station during brunch one weekend. Unfortunately, for him, while he was cooking some eggs the Executive Chef happened to be watching him. He overcooked the eggs and tossed them in the garbage. The chef screamed at him to pay attention to what he was doing. He turned and said to the chef, "It's just an egg."

The chef immediately charged down the line, got an inch from the cook's face and began reciting, at the top of his lungs, every single way to cook an egg, and every single dish composed of eggs that exists in classical cuisine. After 20-minutes of recitation the chef looked at the guy and said, "So, it's not just an egg! You're fired!"

The difference between brown and white egg shells is color and nothing more. The color of the shell is determined by the breed of the laying hen.

Nutritionally there is no difference between eggs that have white, brown or blue-green shells, and flavor differences in eggs come from the diet of the chicken, not the color of the shell, nor the breed of chicken.

The grade has nothing to do with the freshness or size of an egg, it is an indication of its quality, at the time it was collected. They are graded by the USDA and generally only the top two grades, A and AA, make it to store shelves.

Egg sizes in recipes: typically when recipes call for eggs they are referring to large eggs, unless they specify otherwise. You can usually find medium eggs, large eggs, and extra large eggs in stores. Jumbo eggs, the ones that have double yolks, don't often make it to store shelves.

You can test your eggs for freshness by putting them in a bowl of water. If they settle to the bottom they are still good. If they float on top they are bad and should be discarded. To store eggs keep them in the carton, on a shelf, in the refrigerator.

When you crack an egg, rap it once on a flat surface. If you crack them on a sharp edge they produce too much shell shatter, then you're trying to remove all the shell fragment from your eggs. Incidentally, that is why you crack eggs into a dish or bowl and then transfer them to the pan or recipe.

Eggs Cooked In The Shell 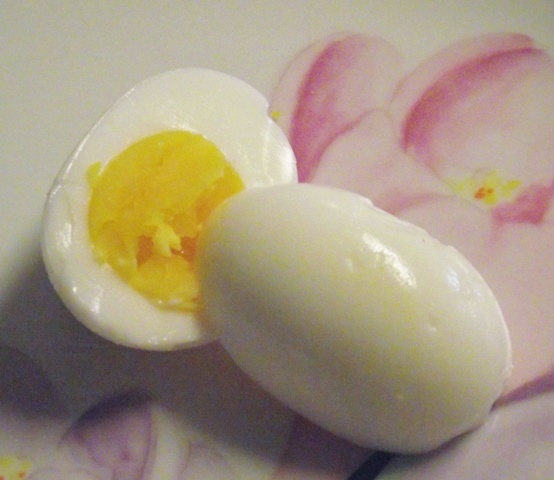 A soft boiled egg should be cooked just below the boiling point of the water, for 3 to 5 minutes.

Hard boiled eggs should be cooked between 180 and 190° F/83 to 88° C, for 10 to 12 minutes. To avoid that green discoloration around the yolk that sometimes appears on hard boiled eggs use fresh eggs, cook them as briefly as possible, and cool them quickly by transferring the eggs to an ice bath immediately after cooking.

Eggs Cooked Out Of The Shell

Poached Eggs
Should be cooked at just under the boiling point. This prevents the whites from spreading all over the pan while at the same time coagulating the proteins quickly.

Fried Eggs
Should be cooked at a pan temperature of  250° F/120° C. This results in an evenly white cooked egg with a liquid center. At higher temperatures the yolk begins to coagulate and you get a crisp brown surface with more flavor, but you sacrifice tenderness.

Scrambled Eggs
The way most scrambled eggs are cooked results in uneven curds, and dry rubbery eggs that are tough. The key to moist scrambled eggs is long slow cooking. They should be added to the pan just as the butter begins to bubble. They need to be stirred and the bottom of the pan scraped continuously with a heat proof rubber spatula. This prevents the bottom from forming large uneven curds and prevents browning. They should be removed from the pan while slightly underdone. As they sit on the plate they will continue to cook and set slightly.

These include soufflés, meringues, mousses, and sabayons. Creating egg foams by hand takes practice. The bowl should be sufficiently large enough to allow for an eightfold expansion and using a balloon whisk greatly accelerates the process. However, a stand mixer will create foams quickly and easily.

When are foams done? The soft peak stage is when the foam is glossy, the edges droop slightly, and the foam doesn't quite cling to the bowl edges. At the stiff peak stage, the foam is still glossy but it clings tightly to the edges of the bowl and maintains a well defined edge or peak.

Adding ingredients affects the temperature that eggs set at. Typically the set temperature is increased by 10 to 20° F. That means that a custard will set between 175 and 185° F/80 and 85° C. The custard that forms is tender and very fragile, exceed the set temperature by 5 to 10° F and you get scrambled eggs in a watery liquid. Careful cooking and controlled temperatures are your key to success with custards and creams.

You can read more facts about eggs and nutrition at the American Egg Board's Egg Nutrition Center.