The first time I cooked a turkey I was 16, The turkey was 25 pounds. The perfect size for 12 people. I dutifully stuffed the cavity with bread dressing and put the bird in the oven at 350º degrees. About 4 1/2 hours later I pulled the bird out and was rewarded with a beautiful browned skin and stuffing that was nothing short of divine. The meat, however, had the taste and mouthfeel of chalk. Not nice, not pleasant! 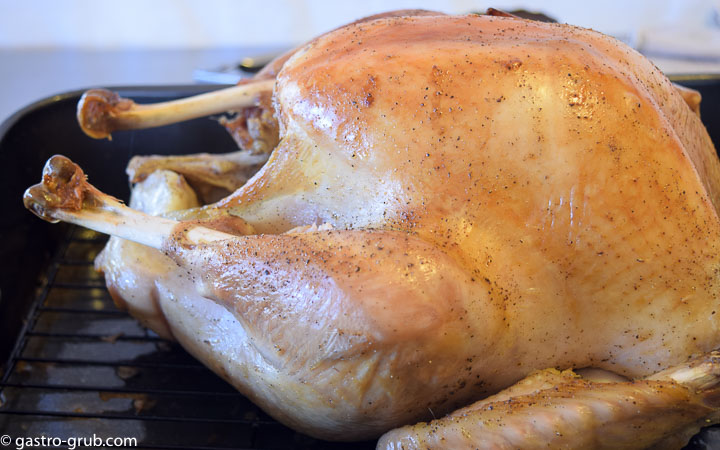 Really, that’s the goal of most turkey recipes, to create a beautiful crispy golden skin and stuffing worthy of the gods, while trying to hide the fact that the meat is dry and flavorless.

So, is it possible to prepare a juicy, flavorful turkey with a deliciously crisp golden brown skin, unequivocally YES!

Both, turkey and chicken, are dry meat to begin with, thus, they are very easy to overcook. Once they are overcooked there isn’t much you can do. To further compound the problem of overcooking they are composed of two very different kinds of meat. The breast meat needs to be cooked to about 160º F, while the leg and thigh need to hit about 180º F. The solution to the problem comes in two parts. The first is to brine the bird. The second is to place aluminum over the white meat, thus slowing down the cooking speed.

If you buy a frozen turkey the very best way to thaw it, and anything for the matter, is to let it thaw slowly in the refrigerator. However, that requires that you buy it 2 weeks in advance. One week to thaw and one week to brine. Another way to thaw that is much quicker is to thaw it in a tub of water. just make certain the temperature of the water remains around 40º F.

Brining your turkey is the best way, and indeed the only way, to have a moist and juicy turkey. As I said turkey is a very dry meat but it doesn’t have to stay that way. I put my bird into a 34 quart pot, and covered it with my poultry brine, 6 days before Thanksgiving. Thanksgiving morning I pulled it out and let it sit about 6 hours before it went into the oven. To brine your bird see How to brine poultry. 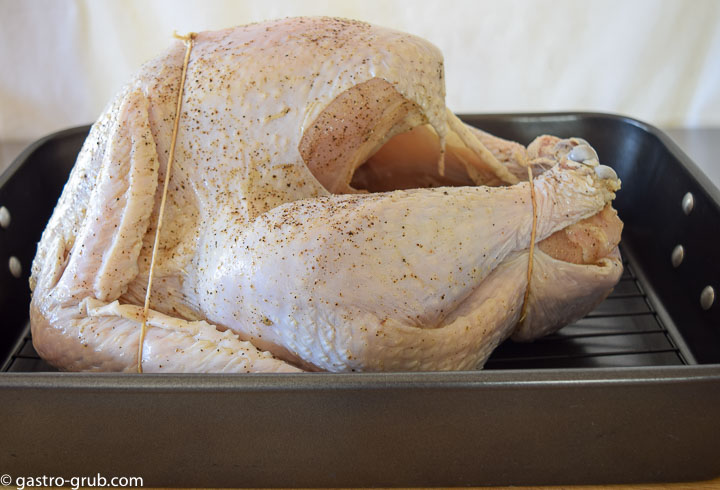 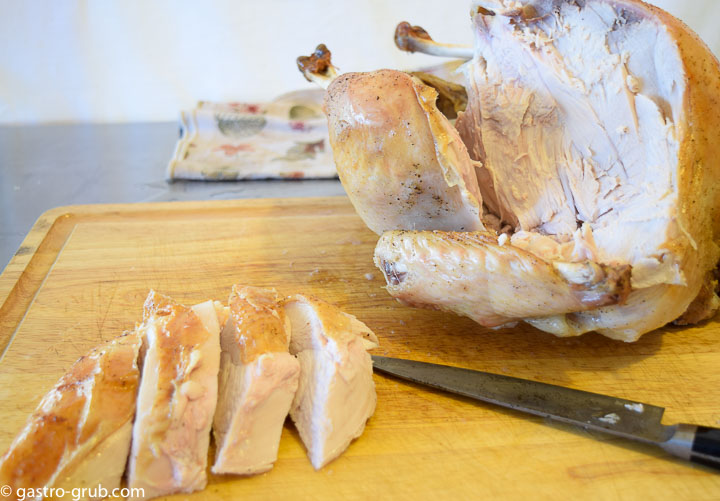 When it is time to carve I like to remove each side of the breast in one whole piece and slice it across the grain.

I have a secret to share with you. I screwed up! When I put the probe into the breast I hit the bone and I didn't realize it. To make a long story short I realized it when the thermometer hit 163º in like 40 minutes. I'm looking at it and I'm thinking there is no possible way on earth. So I pulled the probe and I grabbed a shorter one and temped the bird. That gave me an accurate read, but when I put the bird back in the oven I didn't replace the probe.

I figured I could gage the time in my head. Rookie Mistake! Anyway by the time I got the bird out of the oven the breast was at 170º F. Why am I telling you this, because I want you to understand exactly how powerful a tool brining is, that, and even professional chefs make mistakes.