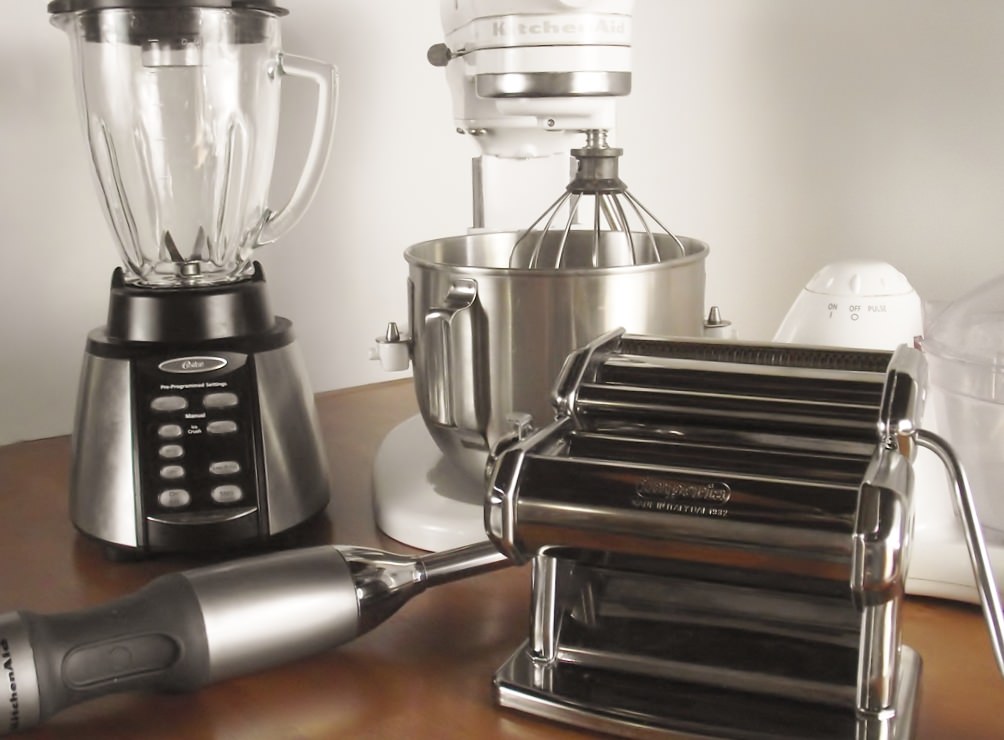 The list of small kitchen appliances is a seemingly endless list. However, you only need a stand mixer, a decent blender, a food processor, a stick blender, a pasta machine, and an ice cream maker. Because, what's comfort food without homemade ice cream?

The stand mixer. In this arena KitchenAid wins hands down. Their only downside is, they are so popular you seldom, if ever, find them on sale. Their entry level model with a tilt head will set you back about  175.00. They go up from there.

Blenders are made by every company out there that has anything to do with small kitchen appliances. For the most part a decent blender can be had in the neighborhood of 40.00 to 60.00 dollars. Blenders that cost less, generally, have less powerful motors and burn out quickly. Blenders that are more expensive offer a much wider range of features but you pay for them. That said if you plunk down the dough (see what I did there) for a high speed blender it'll probably last your whole life. These things are between 1500 and 2400 watts. That's 1 1/2 to 3 horsepower. Huh, how cool is that. Then you can say, " 'sright dude, I have a 3 horsepower blender."

Food processors do some things better than a blender. The design of the bowl and the blade size allows you to force a much thicker emulsion in a food processor than you can in a blender. For the home kitchen Cuisinart makes a very nice food processor.

Stick blenders are really nice tools to own. They allow you to puree hot liquids right in the pot and they do it without blowing the contents of the pot all over the kitchen, like a blender can, a very nice feature. They usually come with a graduated mixing cup. These are ideal for small batches of emulsified sauces like mayonnaise. 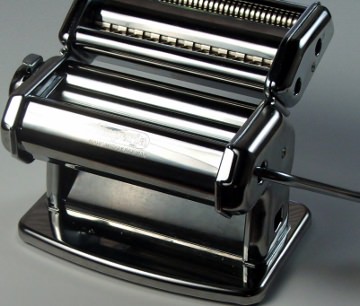 A pasta machine. While I do advocate learning to cook by hand, rolling out pasta can be challenging. These handy machines make it a snap and can be had in the neighborhood of 90.00 dollars. Seriously, with one of these you can make fresh pasta in less time than it takes to drive to the store, buy the pasta, and drive home.

There are three types of ice cream machines that are practical for home use. The significant difference between them is how they freeze the ice cream. The old fashioned style used to have a hand crank and you had to sit there and turn it for what seemed an eternity, well an eternity when I was a kid. Now that same style is available with an electric motor, thankfully.

Some ice cream makers use a bowl that sits in your freezer for 24-hours to freeze the liquid inside the bowl. You pour your ice cream into the bowl, attach the motor and dasher, and in about 30 minutes you have ice cream. This style of machine can only make one batch of ice cream at a time.

There are also dedicated ice cream freezers that sit on the countertop. These are nice machines to own but you need to make quite a bit of ice cream to justify the expense.

What's a food mill, you ask? Only one of the best kitchen appliances ever. It is a bowl shaped or pot shaped mill that uses a spring loaded plate to crush and press food through a strainer plate. Food processors, blenders, and stick blenders make kitchen life easier, but this was how it was done previously and they still add a lot of value in a kitchen.

A great example would be making mashed potatoes out of baked potatoes. You simply cut up the cooked potato, drop it in the mill, turn the crank, and you have potato puree without skins. The skin won't pass through the strainer plate.

Deep frying can be done reasonably well on a gas range. On an electric range it is challenging at best. Using a deep fry thermometer helps, but even so, electric ranges are notoriously difficult to regulate. This is because the heating element can't respond fast enough to increase or decrease the temperature. This makes it near impossible to figure out what setting to put the burner on.

A few words about toaster ovens. I think they are a great appliance to own. You can make toast and you can bake and broil in them. The downside is that they take up a fair amount of counter space. If you are living in one of those renovated broom closets that pass as apartments, like I was when I first moved to NY, a toaster oven probably isn't a good choice.

Another nice-to-have item is an electric griddle. They are great for things like pancakes, eggs. bacon, burgers, and tortillas as well as a long list of other items. Again, they are nice to have around but they certainly aren't necessary.

The microwave oven is curiously missing from my list of small kitchen appliances that you should own. They are commonplace in many homes. That they are convenient is without a doubt. However, there seems to be controversy over whether they are safe or not. Some studies claim that they actually destroy the nutritional content of food, while others claim that they do a better job of preserving the nutritional content of food.

It seems this is one of those decide-for-yourself kind of arguments. Take a look at what a Google search turns up: microwave nutrition study.