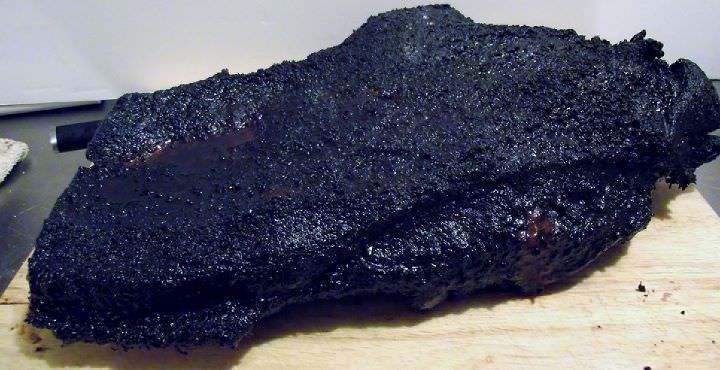 The flavor of my brisket was excellent. However the outcome was less than stellar. I put my brisket on the smoker at 8:00 o'clock in the morning. My first mistake was not letting the fire reach a point of equilibrium. In other words the fire temperature was still jumping around.

Throughout the day I was checking the temperature about every 15 to 20 minutes, my second mistake. That was the perfect interval if you have a lot of experience building a fire that maintains a constant temperature, I don't. Whenever I went to check the temperature and the fire, as often as not, the temperature would be hovering between 200 and 225 degrees. Although there were times when I would check it and it would be spot on, 250 degrees. But those moments were too inconsistent and I turned a 9 to 12-hour cook time into an 18 to 20-hour cook time.

By 9:00 at night the internal temperature was 155 degrees. I gave everyone three options, we could eat the potato salad, sweet rolls, and apple pie for dinner and I would stay up until 3:00 AM to finish the brisket. The second choice was to wait around until 3:00 AM and then we could all eat. The third option was to pull the brisket and put up with a brisket that was not as tender as it should be, that was the option we chose.

I pulled the brisket and let it rest for 30 minutes. At 9:30 PM I sliced it and we dug in. It was delicious in spite of not being tender enough.

The next day I wrapped the remaining meat in foil and put it in a 250 degree oven. I let it go for about two and a half hours. It was perfect. It was also the source of my epiphany. The fundamental problem was not properly controlling the temperature. 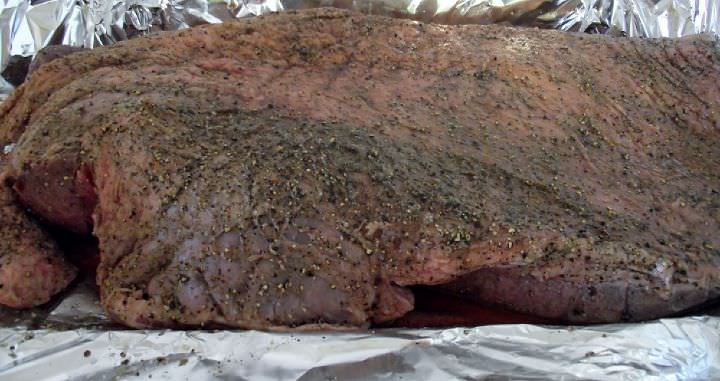 Rub the outside generously with kosher salt and coarse black pepper. 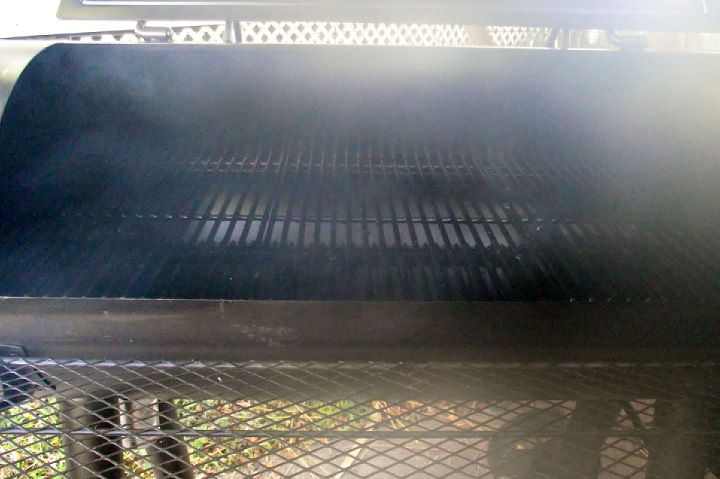 Once it’s burning steadily, add logs and let the temperature rise to 250 degrees. 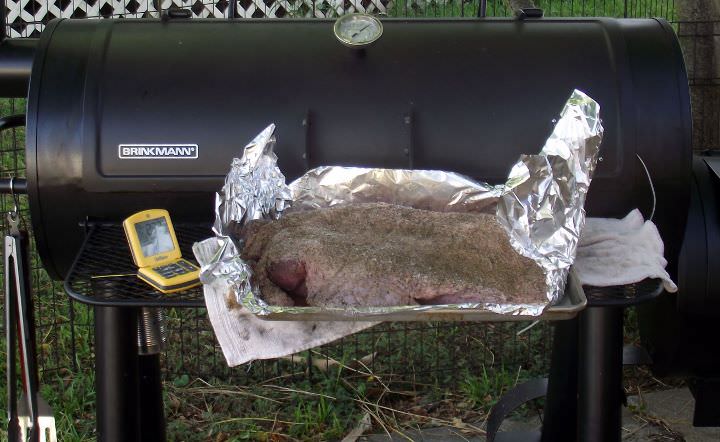 Ready to hoist the brisket into the smoker. 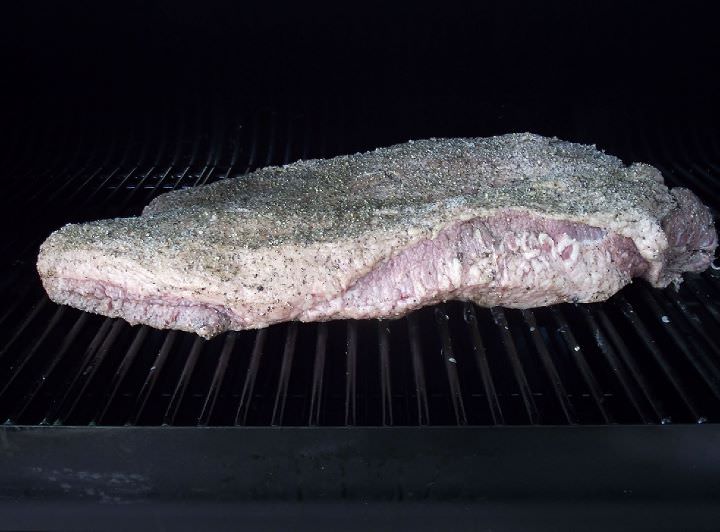 Brisket sitting in the smoke box.

Why do we love and revere brisket above all other barbecued meats? Is it because of its bark, jet black thick and crunchy, maybe its smoky beef flavor, or the streaks of fat moistening every bite? The very nature of brisket is to be delicious. Yet, there is more to it than just that.

Making Texas smoked brisket, as I've discovered, is a quest for culinary enlightenment. It begins with a humble side of brisket. To achieve brisket mastery, You must seek out the mental discipline and embrace the craft of tending the fire.  You must develop a regimen to mind the meat and the temperature. You must have the mental discipline to continually hover over the smoker paying attention to subtle nuances of heat, smoke, and humidity. The rare individual who possesses these characteristics and commits to practicing the craft will achieve brisket alchemy. A tough piece of meat turns into a rich, luscious and flavorful Texas smoked brisket. Comfort food you can relish, that seems so simple ... but it isn’t. 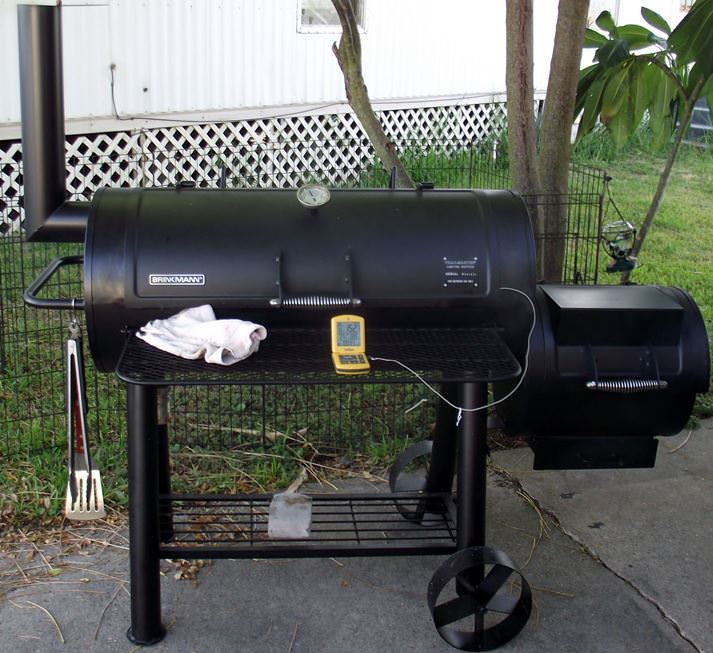 To cook a brisket at home, you want an offset smoker, that’s the design with a firebox off to one end, and set lower than the smoke chamber. If you’re buying one, count on paying at least $300. The best wood for smoking brisket is either oak or hickory because they taste best and burn clean.

Once you have your method down pat, do it 3 or 4 times. Each time you will get a bit better, and each time your family and friends will eat more. A worthy quest.

This is my second brisket and it came out great. 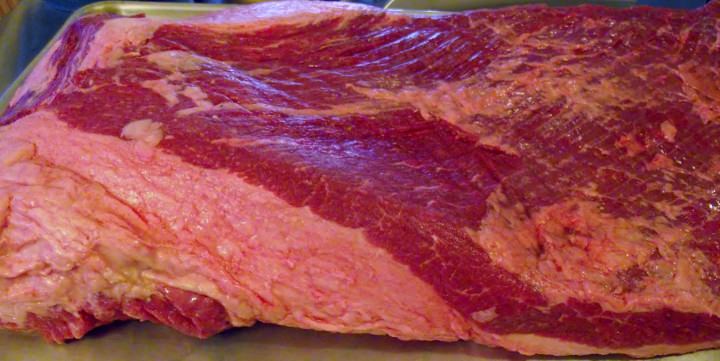 The brisket after I trimmed it. When you trim the brisket you can utilize all of those trimmings. The fat and any small bits of meat can be saved for grinding.

Alternatively, you can use the trimmings to make beef chicharrones, like I did. See how to make chicharrones. 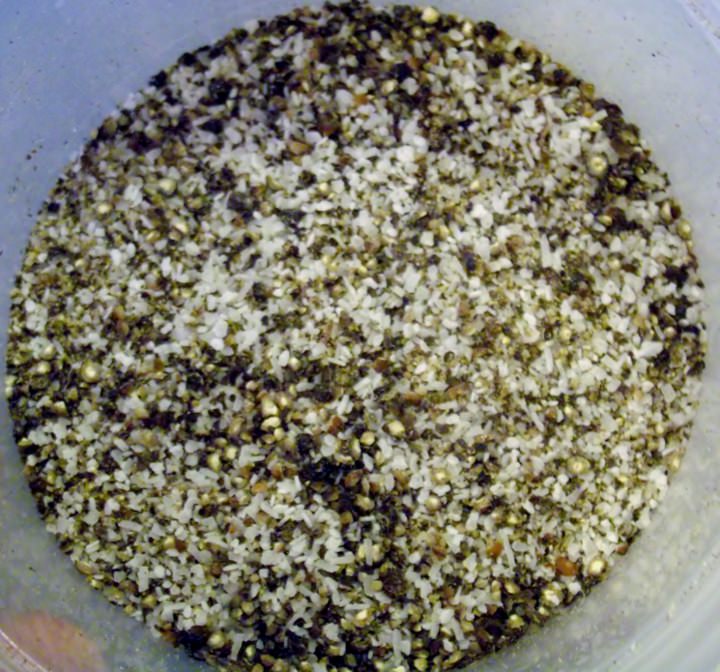 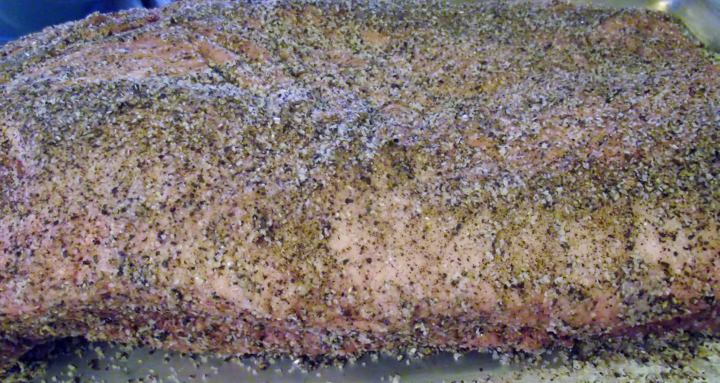 Brisket with the rub, ready to smoke. 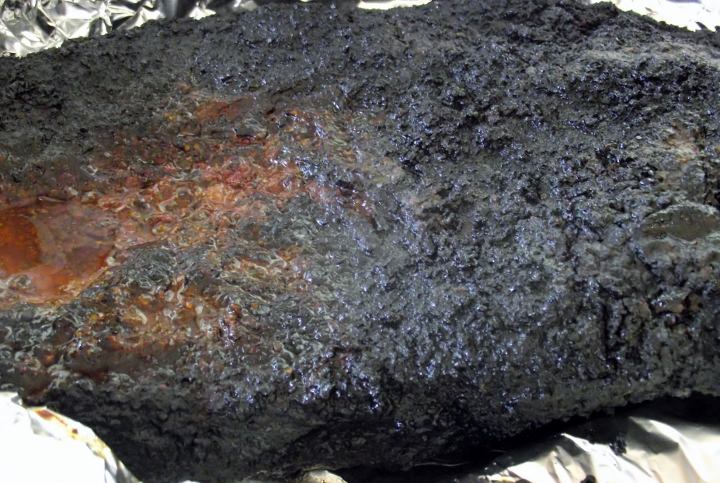 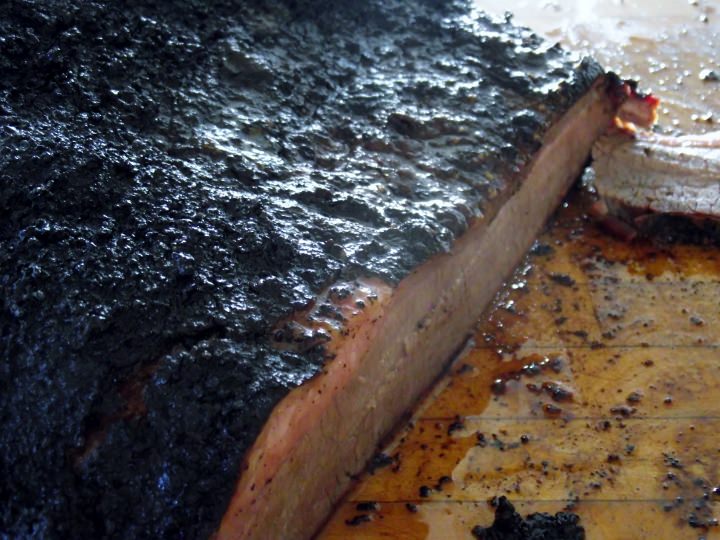 This came out near perfect, smoky, crunchy, tender and moist. 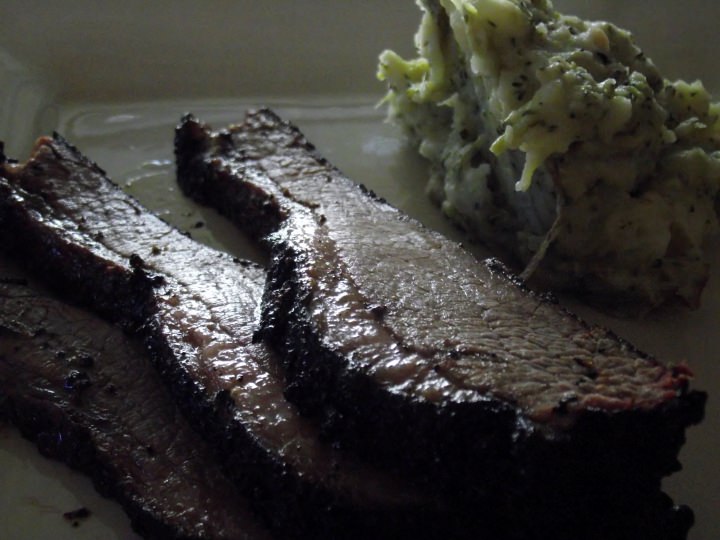 This is my third brisket. While I haven't smoked this one yet I did try and get some better shots so you have a better idea of what to trim, should you buy an untrimmed brisket. 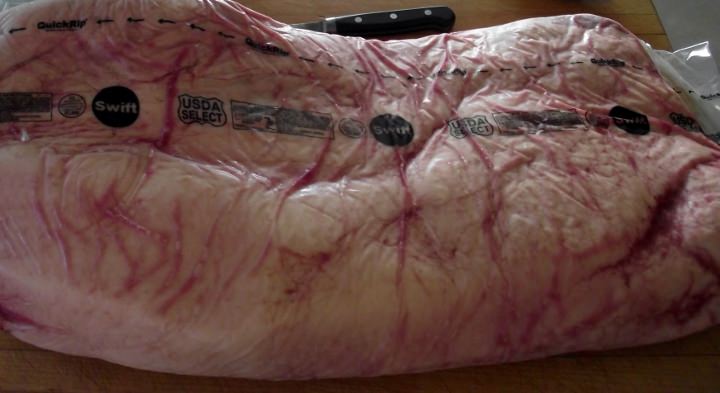 The brisket comes in cryovac packaging and you can see that the grade is select. As I explained earlier I am doing all of my experimenting on select grade beef. However this should be the last one. 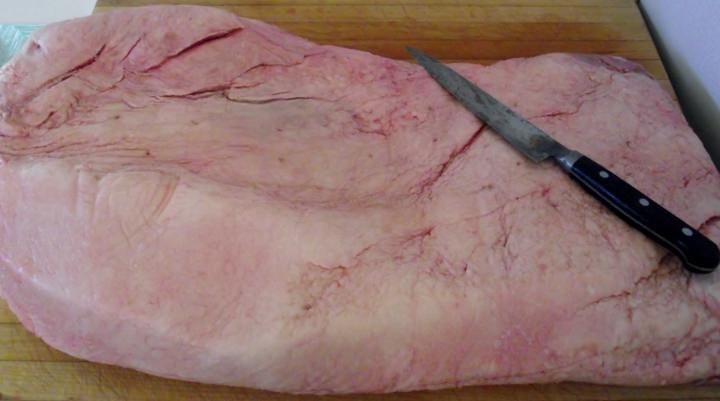 That's the fat cap covering the whole brisket. The point is on the left and the flat is on the right. 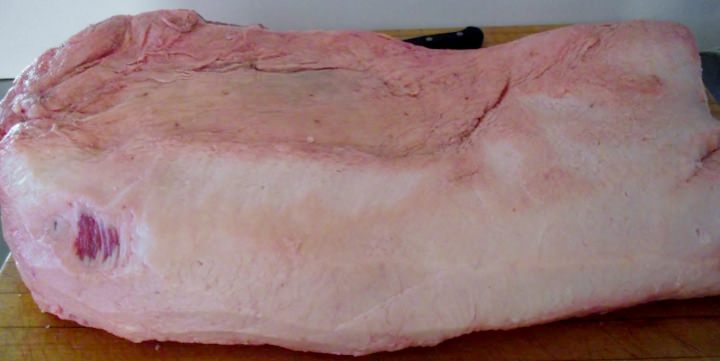 The brisket is trimmed and ready for the next step, which for this brisket is 72 hours in brine. 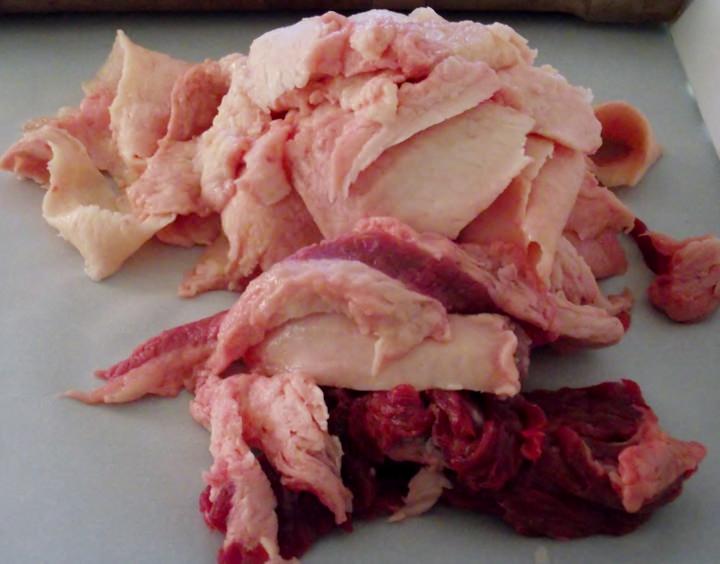 These are the trimmings from the brisket. If you save this you can make tallow, or chicharrones, or you can use the fat to grind into your beef for a burger or meatloaf. 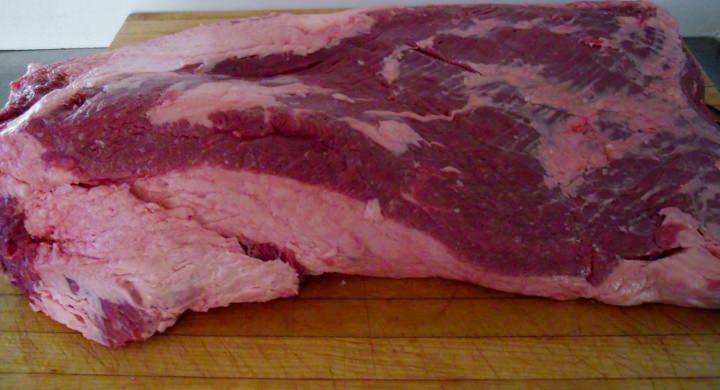 This is what the bottom side of the brisket looks like. Again, with the point on the left and the flat on the right. 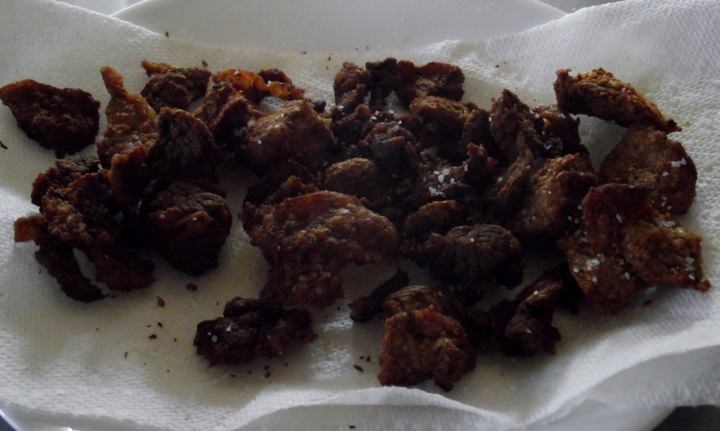 The benefit to making chicharrones, apart from eating them, is that you also get beef tallow. These are highly addictive. 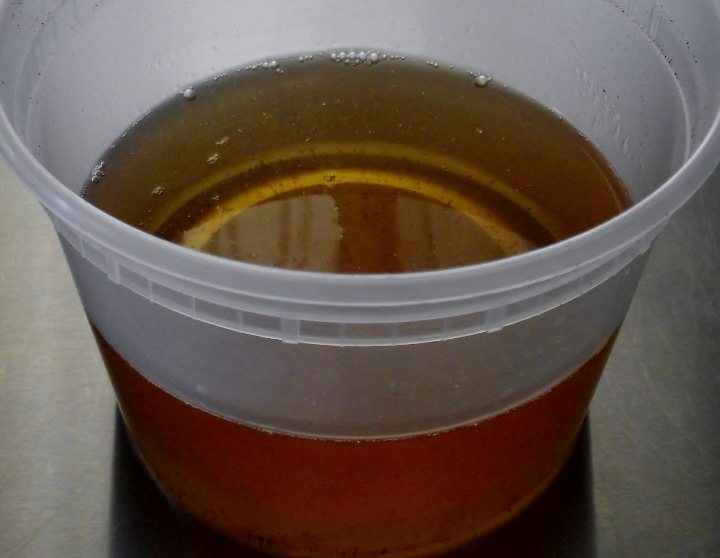 Making chicharrones is a pretty simple process, you cut up the fat into bite size pieces and add them to a saucepan. Look at you volume of fat to render and choose an appropriate sized pot.

Add the fat and add just enough water to coat the bottom of the pot by about 1/8th inch or 3 to 4 millimeters.

Place the pot over a very low flame and cook until the tallow renders out the the fat is crisp and crunchy throughout.

Remove the chicharrones with a slotted spoon and drain on a paper towel lined plate. Season with salt and enjoy.

For the tallow allow it to cool but is still liquid. strain through a fine mesh strainer. Refrigerate until ready to use.